Sometimes words and images go perfectly together. Case in point:

This is a shot from a local lake one misty morning over ten years ago. It’s quiet, meditative. It almost evokes a zen-garden feeling. In itself it’s an interesting enough picture. Not my favorite or best shot, and certainly not my worst.

But over the years it's become my best-seller. And I think it's because of its title. More than one person has commented that it’s the caption that really makes the picture for them. Reportedly, it brought someone out of depression after the loss of a loved one. Others have their own reactions to it and reflections branching out from it.

The title and image serve each other symbiotically as a kind of focusing mechanism for a concept -- different for everyone who has commented on it, but similar in function. It’s the best example I have of words enhancing images.

Interestingly, though it's a good seller (all things being relative), I took it with a crappy old Sony Cybershot DSC-P8, which was a 3.2 megapixel camera. It takes a lot of care to get a good print, and even then I can't print it any larger than about 8x11 inches. But it just shows that it doesn't have to be about the equipment.
at 9:02 PM No comments:

Over the years, I've found myself giving the exact same working title to many of my images, because the name fits so naturally. The title that comes into my head before any other is this: Watercolor. In itself, it's a nondescript word to describe a photograph--more a medium than a subject. But when I'm editing or simply viewing these images, it's the most fitting title.

I've toyed with calling them things like "Watercolor #2" (or #2,000, or #6,439). But I don't need such a naming scheme to identify what is clearly a very strong theme to many of my images. I am, simply put, addicted to making photos of water in its various states: liquid, solid, gas (steam, mist, vapor). I once even had a special sub-section of a photo show devoted to this theme.

There is infinite variety in such a subject; no two images can ever be the same (well, at least not for the liquid and gas phases). Heraclitus said no one ever steps in the same river twice, and this is also true for the person who takes two or more pictures of that river. It's not just that water is an ever changing subject in itself, but in its liquid phase it's also an ever changing canvas of reflections.

If you're one of the 5 people reading this, you already know this about me and my images.

All this to say here are three recent photos (two of which I've deleted from recent blog posts in order to do some quality editing).

Fall is well and truly under way in our corner of Germany. After a good 10 days or so of cold rain, the weather cleared, and warmed up, in time for the weekend. Anne and I went out for a couple runs this morning. It's more than one, because Anne ran hers and I, nursing an aging knee back into shape, shuffled mine.

But that's okay, because I was there for the sights, smells, and sensations as much as for the run. After the first hundred meters running together, I made the first of many stops for pictures of the exploding colors. Anne continued on her way and I didn't see her again until I drove home a few hours later (she ran home).

After the first five miles, I stopped for a beer at a forest Gaststätte, to look through my photos, soak in the sun, and wave away the many bees warmly buzzing around the dishes of cakes and torts the clientele were enjoying on the terrace.

Then I beer-burped the last mile back to the car, collecting pretty leaves on the way.

Here are ten keepers from this perfect morning (click on a photo and use the left/right arrow keys to scroll): 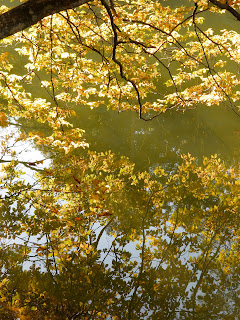 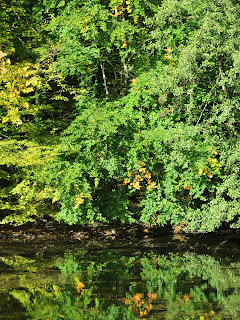 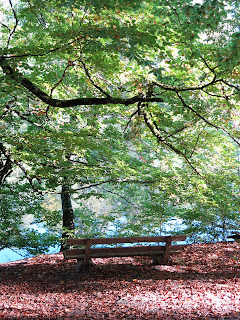 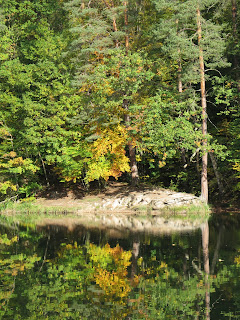 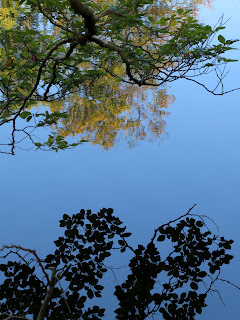 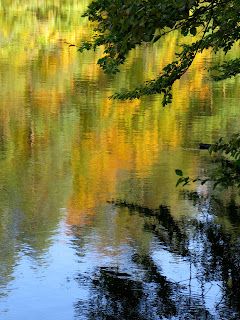 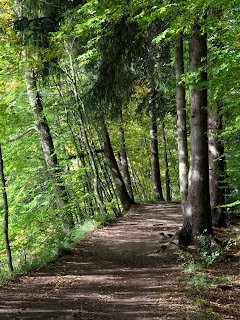 The only thing that’s strange is that nothing is strange. Dropped into a foreign land, yet not at all foreign.

After our departure in September 2017, we kept in the back of our minds the desire to get back to Europe some day in the future. But after four serious moves* in only two and a half years, we were hoping to stay put for a while. If for no other reason than to take a rest. We bought property, we were happy to be near the kids and family... Time for a breather. Time to discover a little of what America had to offer, after 19 years abroad.

And then... Opportunity knocked, and here we are back in Stuttgart (five moves in under four years). 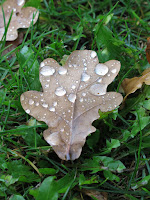 The first weeks, we were pinching ourselves. Differently from the last moves, we knew where everything was, how everything worked. The German began flowing again. We found our favorite running trails, our favorite grocery products, our old friends, our familiar sights. We slipped back into this life as if we were coming home.

It's a weird thing, but the little, unassuming leaf at right encompasses more than you'd think.

The next several pictures show some of the sights we've returned to, and are appreciating to the fullest. (Click to see them larger) 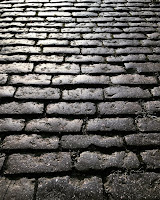 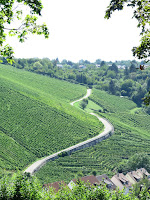 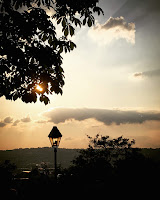 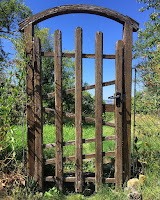 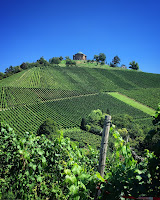 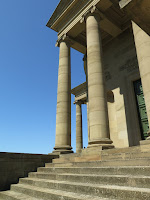 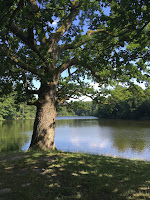 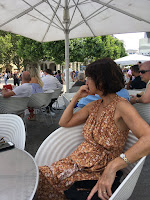 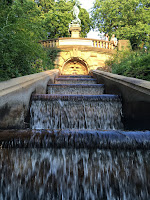 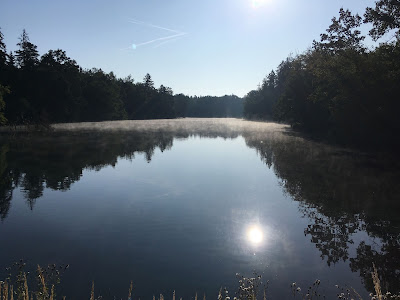 Closing the circle on a series of revelations


Riding along the Neckar river the other weekend, we came upon some navigational locks. I couldn't think of the German word. I asked Anne for the French word to see if that would jog anything. While it didn't jog my memory for the German word (I had to ask a passerby), it did jog something else... Here are the links in my chain of thought:

And thus, the circle is closed.

Let's look more closely at some Germanic, Latinate, and other Indo-European words for a river lock. In addition to above, we have the following:

It's no surprise why this river/canal navigational aid has these names: they require water to be closed in and sluiced out. But it's fun when one word knocks a whole bunch of other words into place in my brain. 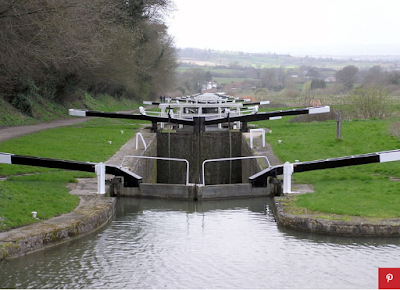 Right. So it's been about a year since the last post, and before that another year, and before that about four years. I've decided to cave in to the overwhelming popular demand and resurrect this little corner of Cyberia. I'm going to shift focus in A Little Light Writing away from exclusively language and photography, and make it more of a place I provide updates to the one or two people I know want them.

I quit Facebook over a year ago, for a number of reasons -- not least of which was the sour feeling FaceBookLife had begun generating.

I'm also currently on an Instagram cleanse. I had started an account to showcase my photography (go see it! @yash.holbrook). Which was fine, but two things happened: 1) I began taking more photos with my phone than with my real camera, and 2) I wasted a lot of time scrolling through my feed and those of others. I'll eventually go back once I've broken the habit, but for now I'm just trying to be bored -- i.e., not tickle my eyes with little squares, and not thinking of things I see in terms of whether it would look good as a little square.

But I'm still taking pictures I would ordinarily share on FB or IG, outlets I've now cut off. So I will start using this blog as that outlet. So let's start with my morning's ride to work through my Stuttgart forests. In particular, a misty sunny October morning at Bärensee. 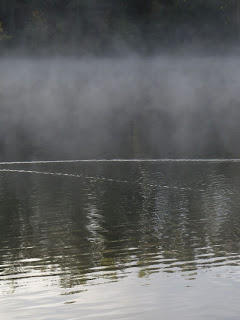 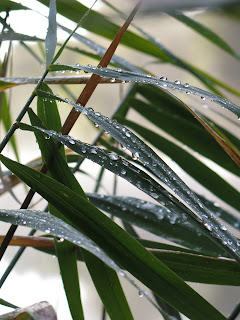 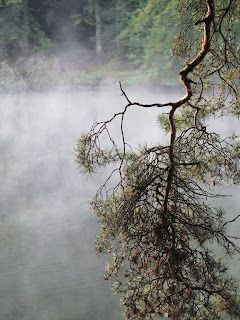 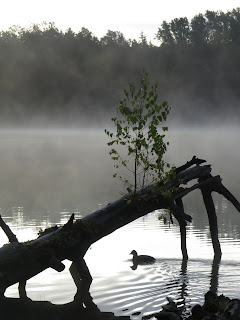 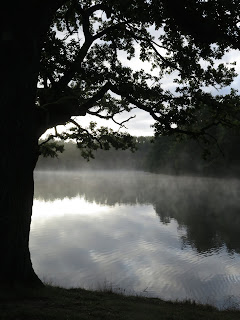 I'll take this opportunity to highlight these are not iPhone pictures.

As an east-coast November kicks off, I find myself sometimes drifting in my mind to the Pacific. Here's where I tend to go:

One February Sunday, a gray and forbidding morning, I got out the door even before my first coffee. My aim was to grab a cup at the Island Brew Cafe on the marina, and go watch the waves rolling into Sunrise Beach. This being a Sunday, formal “sunrise” was already in the past, but the overcast made the point moot. I packed a camp chair into the car, put on some water shoes, and headed out. 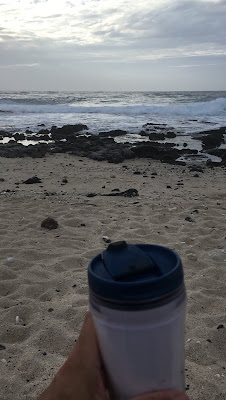 When I got to the water, I grabbed the chair and planted it in the sand. There were only a few shore fisherman on one side of a berm, and just me and the waves on the other.

The surf was wild. The evening before, I had noticed the most energetic wave action crashing at China Walls, and apparently the churn was still on. The air was thick with sea mist. I looked west and saw the looming hulk of Koko Crater, a greenish gloom against the pewter sky. The top of the crater seemed almost disconnected from the earth, cut off by the whitish salt mist.

It wasn’t windy, but the waves were piling in and piling on, crashing into each other before beating onto the rocks. The air was visible up and down the beach, but not if I looked straight out. I could taste salt on my lips. I sat and sipped, watching the turmoil as the waves broke and pushed into the rocky tidal pools a dozen yards from me, then sluiced back out through the ragged crannies.

My coffee was finished, but I sat and watched. I’ve found that, despite telling myself it’s time to move on, I can't tear myself away from the water. My daughter once called the rolling surf mesmerizing, and that’s exactly what it is. It casts a spell that you don’t want to break. Turning your back on the surf is hard.

After 45 minutes, I walked barefoot into the tidal pool directly in front of me. I egg-shelled over the slippery, eroded volcanic rock into the clear pool. The cold shock of the first contact phased quickly to inviting, and my feet sank into in the sand. Up to my knees in clear water, I waited while more pushed into and out of the pool where I was standing.

It took me another half hour to slowly pull back, imagining weirdly that part of me was sluicing out with the water as it rushed away from the shore.
at 1:32 AM No comments: